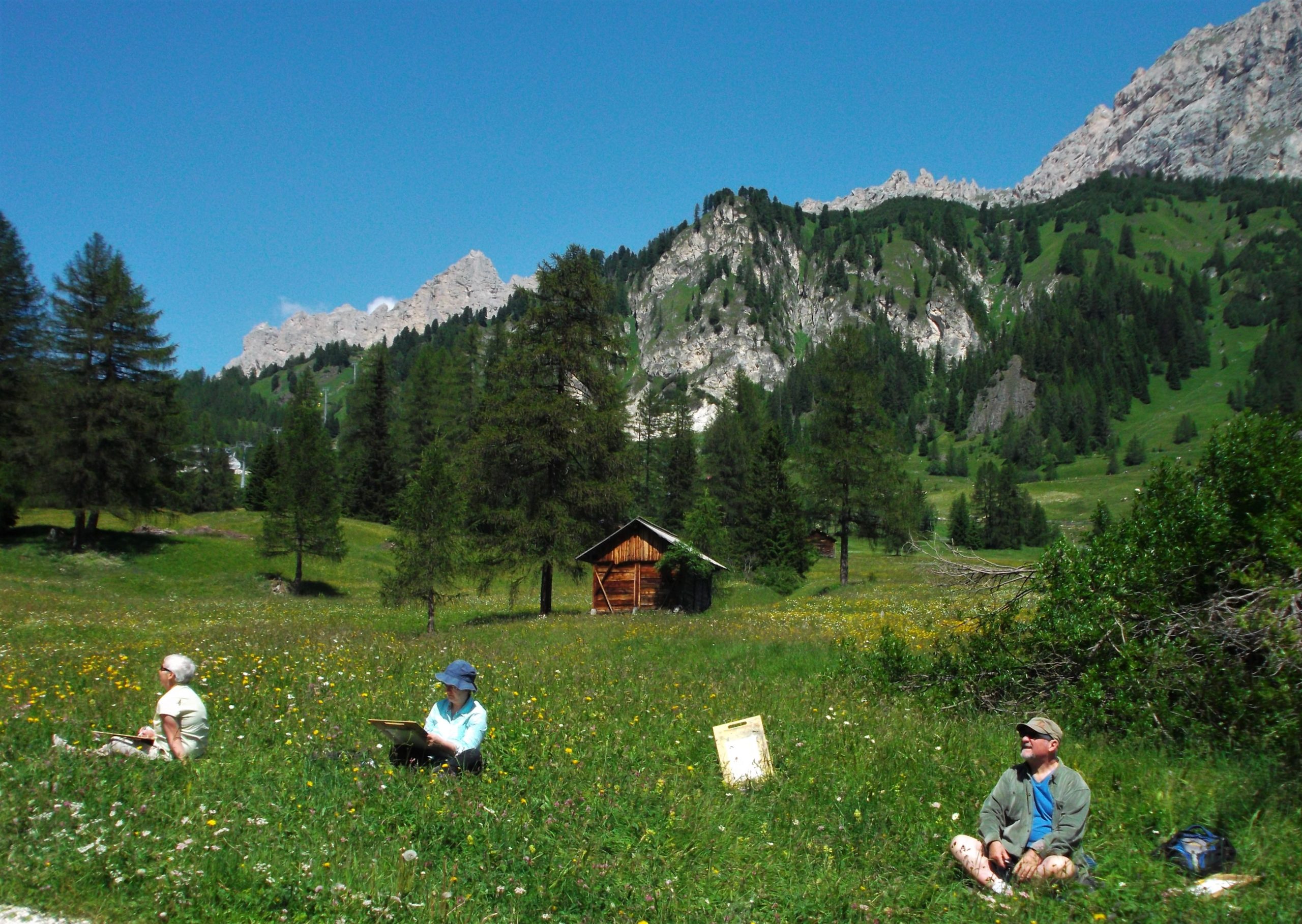 It was during the blissful, if hardworking, season employed as art tutor for a mountain holidays company that I fully discovered my love of watercolour, and at the same time, realised what a completely perfect setting I found myself in, surrounded each day by views that even the most brush-shy would long to paint, and adding it as a destination to the Vistas portfolio was obvious.

The company I was working for concentrated mostly on guided walks, with painting days as an alternative for the weary or curious. Each week I was tasked with providing six different and exciting painting locations which were not too far from our base, Corvara in Badia, in the Italian Dolomites.
As I had never previously visited this part of the world before, I needed two or three weeks intensive exploration, hunting out the best views and getting to grips with the local bus schedules before being let loose on the clients. It was a learning curve in every way. Being at a surprisingly high altitude, I found a Sri Lankan winter had made me soft and I needed to get used to the rocky inclines and thinner, cooler air. It was not long, though, before this unique and spectacular area began to work its magic on me and as the last snows disappeared from the wooded slopes I found I was smitten.

I loved introducing beginner painters to sketching and painting outside and showing them what can be achieved: My aim was to make sure every guest returned at the end of the day with at least one painting they were proud of, even if they had never picked up a brush before. As far as I know, I succeeded.

During August, many Italians have their annual holidays and like to exchange the heat of the cities for the fresh air, cool forests and mountain trails. Even during this busier time I always found the visitors to be friendly and polite, and often interested in what we were doing. One day I was at a popular local beauty spot with a small group, including a lady, let’s call her Sally, who had never painted anything before. Although rather nervous initially, she was doing remarkably well, had completed her first ever watercolour and was just beginning her second. We sat under a fir tree, our finished paintings spread on the ground around us, drying in the sun. A man had been watching us patiently for a few minutes before suddenly announcing he wanted to buy Sally’s watercolour! She was naturally reluctant, as it was her first effort and (she said), she might never do anything she was as happy with again. The man was very disappointed, and as the number of Euros offered went up and up, I asked him if he’d maybe like to buy mine, instead? No! He insisted – that one isn’t nearly as good! He left empty-handed.
That was when I realised you don’t necessarily have to be the best painter to be the best teacher. Although I felt just a teeny weeny bit put out, Sally’s joyful pride on the way home more than made up for it.

Vistas trips to the Dolomites run outside the high season, before the schools close and when the wild flower meadows are at their finest. I still can’t guarantee, however, that you will not be asked to part with one of your masterpieces by an awe-struck onlooker, and the jaw-dropping scenery makes a failed painting pretty difficult. So hang on tight!

Of course, Northern Italy has been hit extremely hard by the Covid crisis and complete recovery will take some time. Departure dates for July 2022 have been pencilled in (keep checking the Year Planner) and I sincerely hope they will be able to go ahead, as much for those who have suffered so immensely in the region as for those of us who are craving a visit.
Contact me with any queries you may have about painting holidays in Italy.