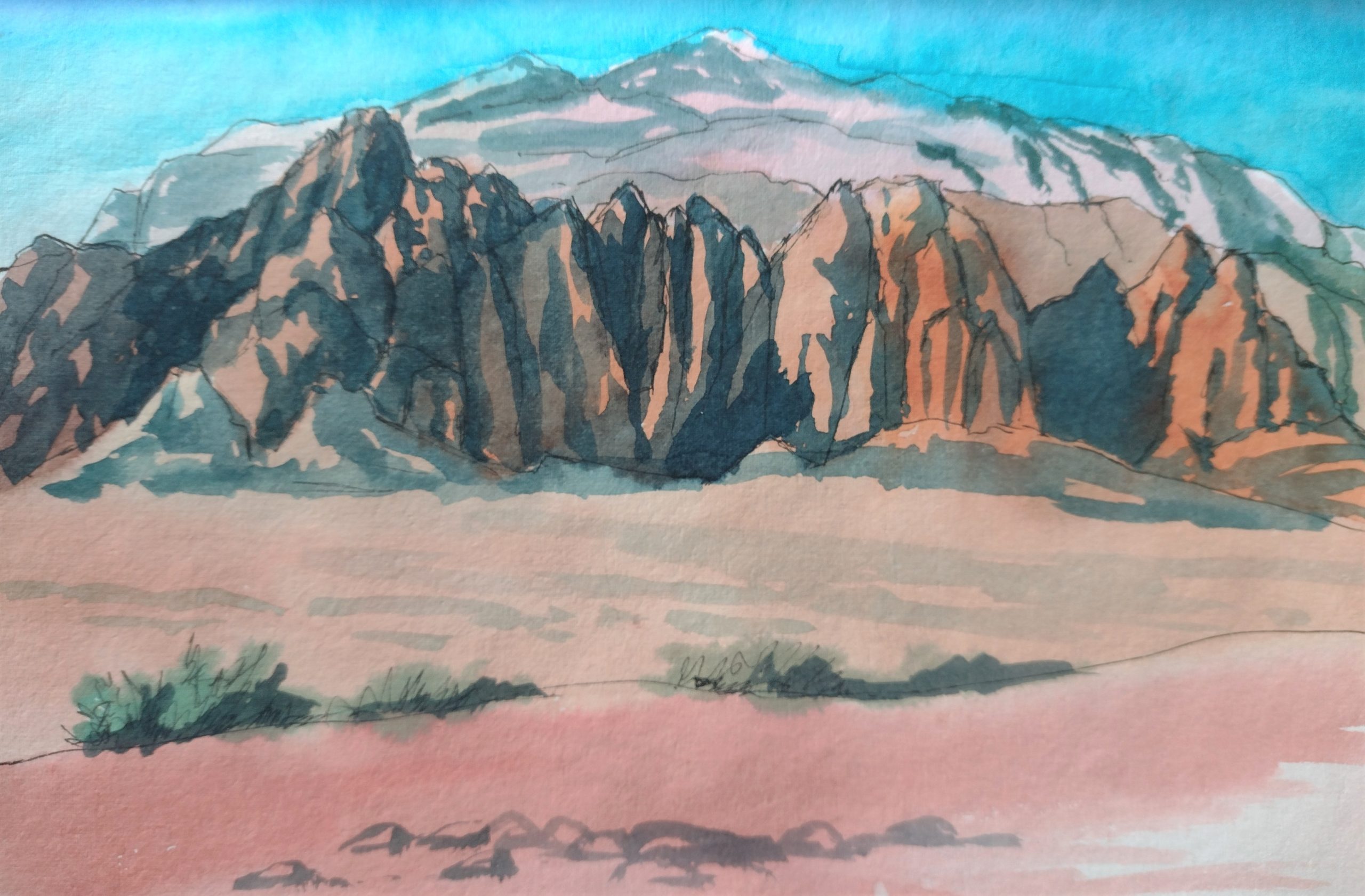 The pastel blue sky and perfect reflections of Lochinver in the glassy bay outside my window this morning were deceptive. I certainly needed my polo-neck sweater and duvet jacket on my walk. A thin layer of frost covers everything and, as the sun has already reached its zenith, it’s unlikely to thaw this afternoon. It is not a day to stay inside, though; after weeks upon weeks of torrential rain we appreciate the weather-gods deciding to be kind to us over the holidays, and make the most of it we must. While it’s actually not unusual for it to be like this around the solstice, it is rather unusual for me to be here, experiencing it.

As I strolled up the lane towards Glen Canisp I spotted something I wanted to paint. Of course, I am constantly surrounded by inspiration here and, in answer to many a vistor’s question: No, I am not immune to it. But sometimes, something different might catch my eye, something hithero unnoticed, or viewed from a different angle. I stopped and admired for a moment but, at a few degrees below freezing, my gloves were not coming off and I was not standing still long enough for a sketch, no matter how speedy. So I have ear-marked the spot for another time, although the precise way the winter sunlight plays upon the bare branches and mosses might never be quite the same.

I continued on, mildly frustrated, thinking about where I would normally be at this time of year: basically anywhere warm enough for my bare knees to welcome in a new year, perhaps with sketchbook on them. I recalled a trip to Jordan, a handful of years ago where, after a couple of days exploring the incredible phenomenon that is Petra (one of the world’s must-sees – one could spend a lifetime painting it), I took myself into Wadi Rum to greet the new year from a desert camp in the middle of nowhere.

Wadi Rum is one of the most stunningly beautiful places I’ve ever been. Pristine sands; dark, rocky outcrops, stone arches; ancient rock paintings, stony plains and utter silence, it’s reminiscent of Morocco and yet somehow vaster, brighter, emptier. I stayed in a tented camp similar to the ones we use in Morocco, yet one which felt even more remote with not a camel and scarcely a person in sight. There were just a few others staying: a French couple, a German father and son and a pair of lads from Russia. We had little conversation and the atmosphere inside the woollen tent was muted but we were united in our desire for peaceful solitude and what was probably our first New Year’s Eve without alcohol. Sipping instead, steaming mint tea on mats around a crackling fire as the first stars twinkled in the indigo sky remains in my mind as one of the most magical experiences ever.

Arriving in the late afternoon, I’d taken my raggedy sketchbook and climbed onto rocks overlooking the camp to watch the sun go down. I wasn’t too pleased with the results, scribbled hastily as they were in the fading light, but like all pages in a sketchbook, when I look at them now I’m transported straight back there, to when the year’s last rays of sun threw deep shadows across the sienna rocks and a crumple of jagged mountains receded into misty layers and I was called back to the tent for a bowl of scrumptious vegetable stew.

I often contemplate Sketching Holiday departures over the Christmas and New Year period for those who like to get away to somewhere warmer at this time of year. As always I appreciate your feedback on this so do contact me with your thoughts and suggestions.

Jordan (Aqaba, Petra and Wadi Rum) is a possibility as a future Vistas destination so, once again, if you might be interested in a trip here, do let me know.