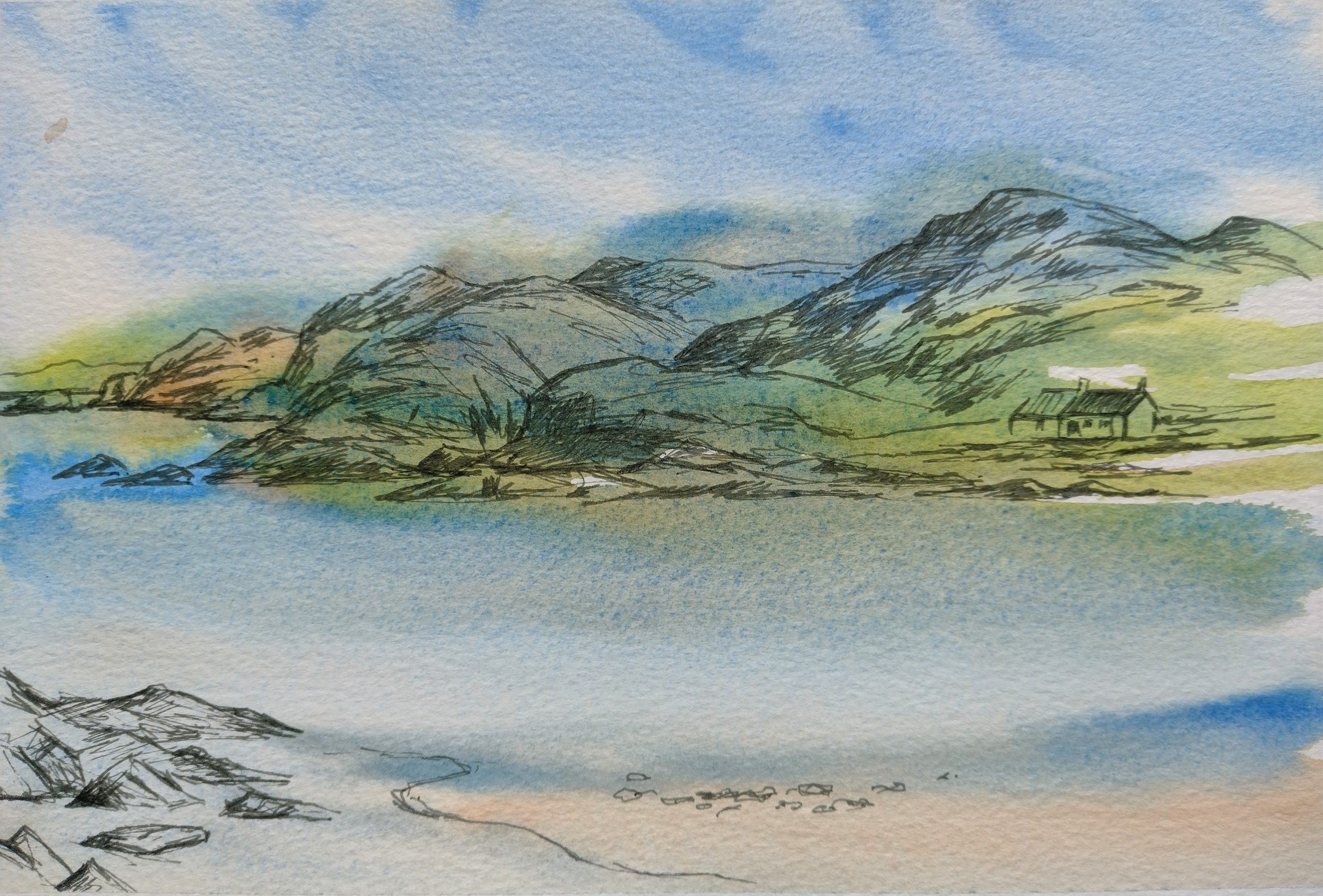 Hands up who’s a dainty painter? You know, the kind of person who can capture an entire panorama on one page of an A5 sketchbook? If so, I envy you. At the very least, you waste fewer trees.

Some years ago I was given a tiny, minature pad of watercolour paper as a sample from a particular manufacturer. The surface itself looked wonderful, but despite carting it around with me pretty much all over the world I could never quite figure out what I was supposed to do with it. It was far too high quality to use for simply testing colours and it was really dinky: I wanted to love it. In fact, what I really wanted was to ditch my heavy, hard-backed A4 sketchbook and use something like that instead… but I simply don’t paint that way.

Anyone who has been on a Vistas sketching holiday or joined one of my workshops will know I use only a size 12 brush. Part of the reason is laziness but mostly it’s practicality: Once I’m in front of my view I’m lost in the moment and with my favourite brush clutched between my fingers there’s no time to fiddle around with others, which would likely have fallen between the cracks in the rocks by then in any case. To paint in such a miniscule pad one would need a very skinny brush. The hardest part, though, is what goes on within the mind.

At art college my tutor once described my efforts as ‘big, bold and colourful – a bit like yourself’. Everyone laughed, though it was meant, I believe, as a compliment. It was the ‘big’ I couldn’t get past – in those days, I wasn’t – but my work certainly was, and still is. Imagine, then, sitting in front of an infinite view and attempting to capture it on finite paper. It’s the biggest challenge for any plein air landscape painter, unless they’re dainty. Using a cardboard viewfinder can help some people know what to leave out, but suppose you really do need to fit it all in – there’s a cottage at one end of the beach and an island graces the horizon at the other side?

My natural style is to go straight in with the pen, but too often I’m caught out, the hillsides taking on a life of their own as they grow on the page to whatever size they want to be; it’s the paper that’s too small, not the drawing that’s too big! After a few frustrating attempts, wondering why I didn’t just bring along an A1 sheet of paper, I sometimes resort to splashing the colour over the paper first, before doing any drawing. For some reason this seems to flick a switch in my brain and I’m better able to contain the lines within their limits. Painting this way gives a loose, free result even with a tight line drawing over the top, since the idea is not to follow exactly where the colour has landed, which will almost certainly not be in the ‘correct’ place. The painting above was an attempt at capturing Clashnessie Beach last weekend. The result is a ‘fail’, but doing the exercise freed me somehow to contain the next painting within the page, which is what I needed.

Sometimes this technique enables me to use just one side of the sketchbook without sprawling across a double page, although I still do plenty of that, too – often intentionally – and I’m yet to try it in the pocket-sized, well-travelled, empty pad.

This website uses cookies to improve your experience while you navigate through the website. Out of these cookies, the cookies that are categorized as necessary are stored on your browser as they are essential for the working of basic functionalities of the website. We also use third-party cookies that help us analyze and understand how you use this website. These cookies will be stored in your browser only with your consent. You also have the option to opt-out of these cookies. But opting out of some of these cookies may have an effect on your browsing experience.
Necessary Always Enabled
Necessary cookies are absolutely essential for the website to function properly. This category only includes cookies that ensures basic functionalities and security features of the website. These cookies do not store any personal information.
Non-necessary
Any cookies that may not be particularly necessary for the website to function and is used specifically to collect user personal data via analytics, ads, other embedded contents are termed as non-necessary cookies. It is mandatory to procure user consent prior to running these cookies on your website.
SAVE & ACCEPT